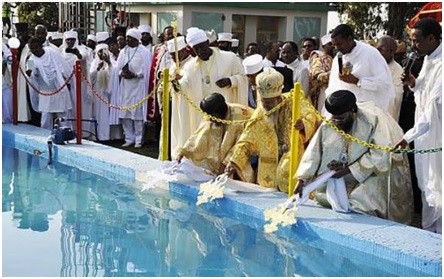 The United Nations Educational, Scientific and Cultural Organization (UNESCO) has decided to inscribe Ethiopian epiphany on its lists of intangible cultural heritage of humanity.

It becomes the 4th intangible cultural heritage of Ethiopia inscribed as world intangible heritage, next to Meskel, the Geda system and Fichee Chambalaalla.

Ethiopian epiphany is a colourful festival celebrated all over Ethiopia to commemorate the baptism of Jesus Christ by John the Baptist in the River Jordan.

The commemoration starts on the eve of the main festival on 18 January. The eve is known as Ketera, which means blocking the flow of water for the blessing of the celebrants.

On the eve of Ketera, people escort their parish church tabot (replicas of the Ark of the Covenant) to Timkete-Bahir (a pool, river or artificial reservoir), transported by a priest of the parish and accompanied by a great ceremony.

The people spend the night attending night-long prayers and hymn services, including the Eucharistic Liturgy. Hundreds of thousands participate in the actual festival on the following day – 19 January.

The celebration starts early in the morning with pre-sunrise rituals. These are followed by the sprinkling of the blessed water on the congregation, as well as other ceremonies.

At around 10 a.m., each tabot begins its procession back to its respective church, involving an even more colourful ceremony with various traditional and religious songs.

The viability of the element is ensured through its continued practice, with Orthodox clergies playing a pivotal role: they sing the praises dedicated to the rituals and hymns, carry the Ark, and preach relevant texts.