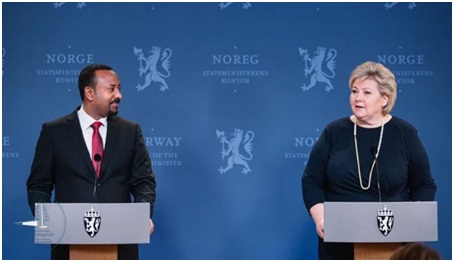 The two discussed various issues, including Ethiopia’s efforts in building democracy and strengthening the momentum that has begun.

According to the Office of the Prime Minister, the leaders agreed to collaborate on rebuilding the Ethiopian Navy through the provision of capacity building support, exchanges and learning for Ethiopian women leaders on political leadership as well as on Ethiopia’s aspiration of a green legacy.

In addition, they deliberated upon regional peace and stability, it was learned.

As part of the Nobel tradition, Prime Minister Abiy Ahmed also held meetings with the President of the Norwegian Parliament, Tone Trøen, and the Standing Committee on Foreign Affairs and Defence led by Anniken Huitfeldt.

The discussions focused on political, economic and social developments in Ethiopia.