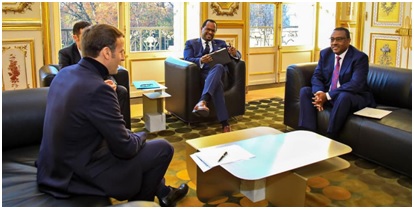 During the discussion held inside the Élysée Palace in Paris today, Demeke delivered a message from Prime Minister Abiy Ahmed to the French President.

The Government of Ethiopia had made all needed efforts for more than two years to maintain the sustainability of the reforms with the required speed and quality, he said.

Despite government’s efforts to resolve the problem through discussion, the TPLF junta had repeatedly committed evil acts, causing harms to the public and the government, he said.

Demeke said the main objective of the law enforcement operation in Tigray regional state, which is now at its final phase, is to prevent the atrocities being committed by the TPLF clique.

Ethiopia’s efforts to resolve its domestic affair by itself is commendable, said President Macron, adding protection should be given to civilians during the operation.

He also called on the government to scale up its efforts of facilitating delivery of humanitarian assistance to people in need, according to office of the Deputy Prime Minister.

President Macron finally said his government is ready to strengthen the level of cooperation between Ethiopia and French.

Government Committed To Respond To Needs of Citizens In Tigray Expeditiously:...