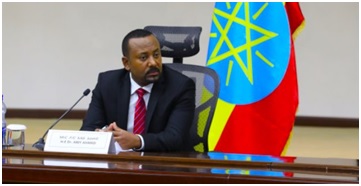 The House of Peoples Representatives is holding its 6th years 2nd extraordinary session in the presence of Prime Minister Abiy Ahmed.

The house endorsed the motion to approve minutes of a previously held 6th year 4th regual session of the parliament.

As per the second agenda, members of the parliament have forwarded queries to Prime Minister Abiy Ahmed based on the ongoing law enforcement operation in Tigray and related current issues in the country.

Responding to queries from house members, Prime Minister Abiy Ahmed  is recounting the weeks and days before his premiership and the TPLF’s open surveillance and duress to create pressure upon those that were expected to be at the helm of the news administration in 2018.

He told the parliamentarians that the government has taken a long distance to avoid hostilities with leaders of Tigray region despite the atrocities they they were committing against the country and interests of the people.

Government tolerated wrongdoings of the TPLF Junta including instigation of communal violence here in all parts of the country and the unconstitutional election they held, Abiy said.

The Premier elaborated how the TPLF Junta was conspiring against his leadership and the people of the country in general in an evil intention to hold back the reform which was introduced two and half years ago.

PM Says 113 Incidents of Communal Violence Occurred Over Last Two And Half Years...