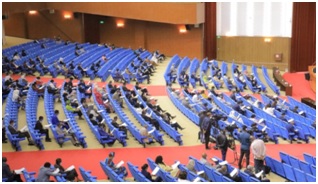 The house agreed on the motion referred in connection with the speech of President Sahlework Zewede on the 6th year joint opening session of house of the federation and peoples representatives, and decided to approve it after the Prime Minister forwards his comment on the issue.

Examining the draft proclamation of commercial code, the house submitted the issue to Trade and Industry Affairs Standing Committee for further scrutiny.

The parliament further examined the draft proclamation of the agreement signed between Ethiopia and Russia for peaceful nuclear energy development and referred it to the Foreign Relations and Peace Affairs Standing committee for further assessment.

Parliament also examined the draft proclamation referred to it in order to amend the FDRE criminal procedure code which has been effective for the last thirteen years, and passed on the issue to Legal, Justice and Democracy Affairs Standing Committee of the house.