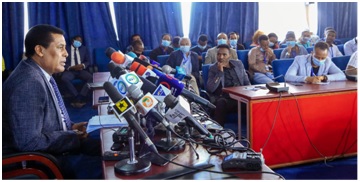 The Spokesperson of The Ministry of Foreign Affairs of Ethiopia, H.E. Ambassador Dina Mufti, has presented the Ministry’s biweekly press briefing today (March 09) focusing on political diplomacy, the GERD issue, and major activities related to Economic Diplomacy and citizen-centered diplomacy.

• H.E. President Sahle-Work Zewde on Friday (March 05) received the credentials of the Ambassadors of the U.S.A., Kenya, Switzerland, Chad, and Gambia. They had discussions over bilateral, regional issues. They noted the importance of solving African solutions to African problems. The President has also briefed the Ambassador on current situations in the Tigray region.

• Deputy Prime Minister and Foreign Minister H.E. Demeke Mekonnen had briefed Ambassadors and representatives of members of the United Nations Security Council in Addis Ababa on the current situation in Tigray. According to Mr.Demeke:

• Deputy Prime Minister and Foreign Minister, H.E. Demeke Mekonnen had a phone conversation yesterday with Canada’s Minister of Foreign Affairs, H.E. Marc Garneau on issues of mutual concern, particularly the situation in Tigray with regard to humanitarian support activities and human rights concerns, and the upcoming general election in Ethiopia. Mr. Demeke told the Canadian minister that despite the unimpeded access to humanitarians, support from the international community does not exceed the government’s enormous contribution in delivering food and non-food items.

• Deputy Prime Minister and Foreign Minister, H.E. Demeke Mekonnen welcomed at his office today (March 08), US Ambassador to Ethiopia, H.E. Geeta Pasi. Noting the multifaceted relationship between the two countries, particularly in education, health, and security issues, they underscored the need to scale it up with expanded engagements. Mr.Demeke expressed his hope that the unhindered access to humanitarian support in the region will be followed by extensive support from the international community.

• The Ministry of Foreign Affairs of Ethiopia celebrated yesterday International Women’s Day under the theme, “Women in leadership: Achieving an equal future in a COVID 19 world”.On the occasion, State Minister H.E Ambassador Birtukan Ayano, said the day symbolizes the sacrifice paid by women, the successes achieved, and barriers that need to be removed for more equality. There used to be very few women in diplomacy said the State Minister, but now we are witnessing advances through all of the reforms the Ministry has gone through so far. She urged women in the diplomatic field to work towards achieving the economic and security interests of the country, promoting its positive images, and working for regional peace with the utmost discipline.

• Ethiopian Embassy in Brussels and Ethiopian Airlines’ Benelux Area Office co-organized a virtual event last week titled “Ethiopian’s Tourism Potentials: Promoting Ethiopia as a Preferred Destination for Tourists”. The event was aimed to promote Ethiopian tourism to the tour operators based in Belgium and Luxembourg, connect Ethiopian tour operators with Belgian and Luxembourger counterparts, and create a platform for discussions on the prospects and challenges of the sector.

• The consulate general of Ethiopia in Chongqing, China participated in an online meeting with a joint meeting of Chagan, a Chinese car manufacturer, and Ethio-Engineering Group, where the two agreed to work together to assemble cars in Ethiopia.

• We have repatriated 54 citizens from Beirut, 676 from Riyadh, and 341 from Jeddah over the week.