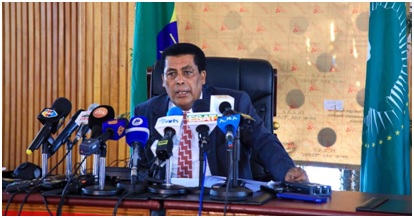 The recent visit of Prime Minister Abiy Ahmed to Mekelle city indicates that the region is returning to normalcy, said the Ministry of Foreign Affairs (MFA).

The Prime Minister last Sunday travelled to Mekelle, Tigray regional state, where he met with top military leaders and the interim administration of the region.

In biweekly press briefing today, MFA Spokesperson, Ambassador Dina Mufti, said “the visit of the Prime Minister, Dr. Abiy Ahmed, to Mekelle after the end of the law enforcement operation in Tigray regional state shows that peace in the region is returning to normalcy.”

During his meeting, the Prime Minister underlined that the most important task left now is restoration and rehabilitation in addition to man hunting the criminals, he said.

According to Ambassador Dina, the interim administration in Tigray is establishing its bureaucratic structure in various cities of the region from the kebelle to the upper level.

Following the rehabilitation of infrastructure which sustained heavy damages because of the criminal clique militia’s irresponsible acts, mobile voice services have been restored in Mekelle city and Maiychew, in addition to Dansha, Humera, Maikadra, Turkan, Maytsebri, Korem and Alamata, he said.

Mover, electricity has been restored to Mekelle city and surrounding towns, in the north western part of the country – specifically Metema, Humera and Welkayit, the ambassador added.

He said the Government of Ethiopia has been delivering food and medical supplies to Tigray after building makeshift bridges as the criminal TPLF clique destroyed the existing ones in the region.

The ambassador said a favourable environment is now created for making the aid accessible.

In his briefing, the Spokesperson touched on the economic and citizen-centered diplomatic activities carried out by the government within the past two weeks.