Blog - Latest News
You are here: Home / Uncategorized / Scientific analysis by technical experts should be a base for cooperation... 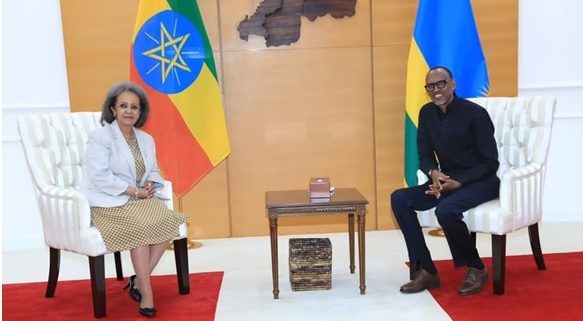 H.E. President Sahle-Work exchanged views with the president of Rwanda, H.E. President Paul Kagame on Monday (March 16) in Kigali, on recent developments about the GERD talks.

In his remarks, H.E. President Paul Kagame underscored that cooperation among the Nile Basin countries should take into account the scientific analysis provided by technical experts.

As Egypt considers the Nile as a survival issue, it has to also acknowledge the natural rights of riparian countries to exploit the resource, Kagame added.

Noting that the Nile issue is an issue for all riparian countries, the Rwandan president called on to solve disputes over the river through Africa-based discussions and negotiation forums, adding that his country is committed to being part of the solution.

President Sahle-work for her part said Ethiopia has been committed to establishing the principle of reasonable and equitable water use among the Nile Basin countries.

Citing the Nile Basin Cooperative Framework Agreement (CFA), as an achievement that stems from Ethiopia’s commitment, the President underscored that Ethiopia has been working closely with the rest of the riparian countries.

Ethiopia has also been facilitating comprehensive engagements to address the concerns of the riparian countries since the inception of the construction of the Grand Ethiopian Renaissance Dam, President Sahle-work added.

She hoped the 2015 Agreement on Declaration of Principles that was signed in Khartoum between Ethiopia, Sudan and, Egypt would be implemented and prove Ethiopia’s stance that the Nile Basin can be a source of cooperation rather than conflict and misunderstanding.