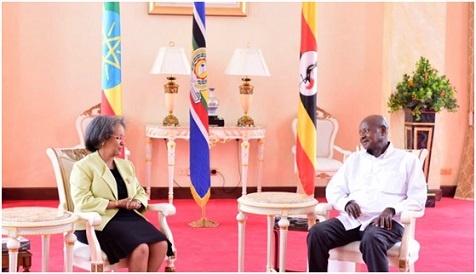 The two leaders exchanged views on a wide range of bilateral, regional and international matters of mutual interest.

She also briefed President Museveni on the negotiations regarding the Grand Ethiopian Renaissance Dam (GERD).

President Museveni reiterated the importance of ensuring the equitable and sustainable use of the River Nile waters.

The two leaders recognized the strategic importance of the Nile for all the riparian countries and the livelihood of their peoples and the need to solve any issues among the countries within the framework of African solutions to African problems.

President Museveni emphasized the need to urgently convene a summit of the Nile Basin Commission so that the Heads of State have a frank discussion on the issues of the Nile.

On bilateral matters, the two Heads of State noted with satisfaction the cordial relations that exist between the two countries.

They noted the existing cooperation in various fields including transport, trade, tourism, defense, and security, and pledged to continue closely working together for the mutual benefit of the two countries.

The two leaders also exchanged views on the state of peace and security in the IGAD region and Africa at large.

They welcomed the formation of the Revitalized Transitional Government of National Unity in South Sudan and urged all the parties to commit to the restoration of peace and stability in South Sudan.

Nile should be a Major Source of Cooperation than Conflict: FM Gedu (March 10,...

Scientific analysis by technical experts should be a base for cooperation in...