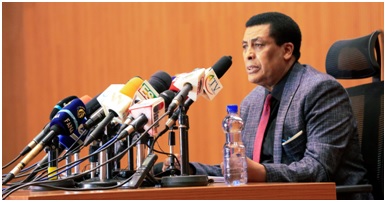 The spokesperson of The Ministry of Foreign Affairs of Ethiopia, H.E. Ambassador Dina Mufti, gave the Ministry’s biweekly press briefing today to the media. In his presentation, the Ambassador focused on political diplomacy, the GERD negotiation, the situation in Tigray, citizen-centered diplomatic activities and capacity building.

H.E. Demeke Mekonnen, Deputy Prime Minister and Foreign Minister of Ethiopia had a discussion on Thursday (April 22) with H.E. Mr. Oleg Ozerov, Ambassador-at-Large, and Head of the Secretariat of Russia-Africa Partnership Forum that was held on 22 April 2021. The two sides discussed preparations for the Second Russia-Africa Summit which will be held in 2022 in Africa. During the discussion, Mr. Demeke told the Secretariat Ethiopia’s commitment to strengthen the long-standing relations with Russia and appreciated the initiative of Russia to establishing the platform. They also exchanged ideas on cooperation in the areas of security, innovation/technology, agriculture, energy, nuclear medicine, geology exploration, etc.

Deputy Prime Minister and Foreign Minister of Ethiopia H.E. Demeke Mekonnen had a phone call with Minister of Foreign Affairs of Việt Nam H.E. Bùi Thanh Sơn to discuss bilateral ties and co-ordination at multilateral forums on the occasion of the two nations marking the 45th anniversary of their diplomatic relations. Mr. Demeke appreciated Việt Nam’s successful implementation of its dual goals of pandemic containment and socio-economic development. The Deputy Prime Minister and Foreign Minister also highlighted his respect for Việt Nam’s achievements in external relations, particularly as Chair of ASEAN last year and a non-permanent member of the UN Security Council for 2020-21.

Ethiopian Ambassador to South Sudan, H.E. Ambassador Nabil Mahdi has met H.E. Deng Dau, Deputy Minister of Foreign Affairs and International Cooperation of South Sudan to discuss bilateral and regional issues of common concern. The Ambassador detailed the status of the negotiations over the GERD, the Ethiopia-Sudan border dispute, and the current situations in Tigray.

Prime Minister Abiy Ahmed on 19 April 2021 wrote a letter to Sudanese counterpart, H.E. Abdella Hamdok and explained Ethiopia’s position on PM Hamdok’s assertions on the DOP and the results of the negotiation and charted out the way forward. Accordingly, the letter says,

The right course of action to end the impasse over the tripartite negotiation of the GERD is to request the Chairperson of the African Union, H.E President Felix Tshisekedi to call the meeting of the Bureau of the Assembly of the AU. Ethiopia believes that the Assembly should reinitiate the direction given to the tripartite last year in July during South Africa’s chairmanship to finalize the text of the guidelines and rules on the first filling and annual operation of the GERD and then to report back to the Bureau of the Assembly.

Choosing the path of Principle 10 of the Declaration of Principles (DoP) may reverse the whole process back to square one and risks undermining the gains the tripartite have made through painstaking negotiation over the GERD. In addition, Article 10 of the Dop can be interpreted in three ways where Ethiopia does not agree with Sudan’s interpretation. For example, the divergence of opinions among the tripartite technical or legal experts should not be construed as a dispute in interpretation or implementation of the DoP.

“If parties negotiate in good faith results are within our reach,” says the letter, and “Ethiopia still believes that the best way forward is to continue the trilateral negotiation under the AU led process to reach a win-win outcome.

Members of the UN Security Council have issued a press statement on the situation in Tigray on 22 April 2021. They have expressed some of their concerns and,

Welcomed the joint investigation by the Office of the United Nations High Commissioner for Human Rights (OHCHR) and the Ethiopian Human Rights Commission into alleged human rights violations and abuses. The members of the Security Council also welcomed the engagement on this issue of the African Commission on Human and People’s Rights.

Reiterated support to regional and subregional efforts and organizations, namely the African Union and the Intergovernmental Authority on Development (IGAD), and underscored the importance of their continued engagement.

Reaffirmed their strong commitment to the sovereignty, political independence, territorial integrity and unity of Ethiopia.

The Permanent Mission of Ethiopia to the United Nations has also issued a statement in response to the Security Council.

Appreciated the friendly members of the Council for their constructive considerations, continued support, and understanding

Underscored that the law enforcement operation in Ethiopia is an internal affair regulated by the laws of the country, including human rights laws

Reiterated that the Government of Ethiopia is currently providing a significant portion of the humanitarian assistance delivered to those in need and will continue to allocate the maximum available resources.

We called on international partners to scale up assistance to satisfy humanitarian needs in the Tigray region and beyond.

Expressed commitment to investigate and ensure accountability for alleged violations of human rights, including sexual violence

State Minister H.E. Tsion Teklu has participated in an online discussion that was facilitated by Ethiopian embassy in Kenya to promote Ethiopian tourist attraction sites. The state minister has thoroughly explained various investment opportunities in Ethiopia in the tourism sector with a potential of attracting Kenyans.

Meetings that consulted bilateral and Economic relations between Russia and Ethiopia were made between H.E. Ambassador Alemayehu Tegenu and Mr. Vladimir Zapevalov representative of the Ministry of Foreign Affairs of the Russian Federation in St. Petersburg and the Chairman of the Committee for External Relations of St. Petersburg, Evgeny Grigoriev. Both sides agreed to enhance the existing business relation, and noted the success of the first Russian-Ethiopian business forum held in April 2019 at St. Petersburg and the recent business delegation visit to Ethiopia that took the relation one step forward. H.E. Alemayhu proposed to hold the second business forum in Addis Ababa in June 2021.

A delegation led by State Minister H.E. Ambassador Birtukan Ayano has continued its efforts to consult Ethiopians and people of Ethiopian decent critical issues of the nation. The meetings that were handled by Mrs. Selamawit Dawit, Director of the Ethiopian Diaspora Agency in Seattle and Los Angeles over the week highlighted the importance of unity among Ethiopians challenging times and cooperation (in every way possible) for the successful completion of the GERD. The Ethiopian Diaspora associations in the stated areas have handed over collected funds for the GERD from each of the stated areas while they detailed their performance report on the occasions.

The Ethiopian embassy in Canada in collaboration with Alliance for GERD in Canada has held a webinar discussion entitled,” Updates on GERD and Information Session on GERD Bond Purchase”. Present at the discussion, H.E. Eng. Seleshi Bekele, Minister for Water, Irrigation, and Energy of Ethiopia tabled presentations over the current status of the GERD construction and what is expected of the Ethiopian Diaspora to support the project. The Minister made a call to Ethiopian Diaspora in Canada to stand together and extend help to the completion of the national flagship project.

A total of 947 Ethiopian citizens were returned from Saudi Arabia (592 from Jeddah and 339 from Riyadh and 16 from Puntland ).

The Ethiopian Diaspora Agency, under the leadership of Dr. Mohamed Endris, Deputy Director General of the Agency provided training on using Diaspora Database to mission leaders, diplomats and ICT professionals in 13 Ethiopian Missions in Europe. Based on the inputs acquired during the training, the Agency will further develop the Diaspora Data Registration and Management System which will be implemented across Ethiopian missions.