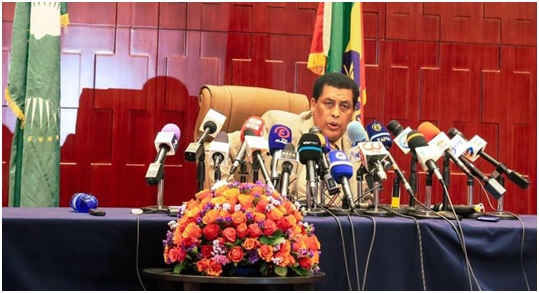 Deputy Prime Minister and Foreign Minister Demeke Mekonnen confers with US Special Envoy to Sudan and South Sudan Ambassador Donald Booth. The Deputy Prime Minister briefed the delegation on the tripartite negotiations of the Grand Ethiopian Renaissance Dam reiterating the issues below:

• Although Ethiopia contributes 86% of the water share of the Nile River, 60% of its citizens still live in darkness and Ethiopia aims to change this once the construction of the dam is concluded.

• Ethiopia has legal and sovereign right to use the Nile water for development fairly and equitably and that Ethiopia has no interest in harming the lower Nile Basin countries in doing so.

• Ethiopia has always been committed to resolving issues through negotiations, in a way that addresses the concerns of Sudan and Egypt.

• Talks to change the modalities of the negotiations should be treated according to the provisions of the DOP, which was signed by the tripartite in 2015.

• The filling of the dam is part of the overall construction project.

Ambassador Donald Booth, on his part, reiterated the longstanding relationship between Ethiopia and the U.S. and his country’s readiness to assist the tripartite whenever necessary.

Ambassador and Permanent Representative of Ethiopia to the United Nations, H.E. Taye Atske Selassie briefed the African Group of Ambassadors in New York on the situation in Tigray. He thanked the Group for their solidarity and support underscoring Ethiopia’s resolve to come out stronger. Members of the AG relayed that Ethiopia will prevail as it had in the past.

Ethiopian embassies in Canada and the US had a webinar meeting on the GERD and related issues on Saturday (March 27). The need to organise the Ethiopians and origin of Ethiopians abroad to increase funding to the GERD was underscored in the meetings.

The Jerusalem Institute for Policy Research organized a Virtual workshop in collaboration with the Ethiopian Embassy on the Topic “From Ethiopia to Jerusalem”. The meeting discussed the historical and spiritual relationship between the two countries that enabled Ethiopia to maintain a significant place in Jerusalem.

Many countries, including the UAE are offering us to mediate the Ethio-Sudan border dispute that Ethiopia expressed its appreciation for the initiatives.

Investigations on alleged atrocities- The Ethiopian Human Rights Commission (EHRC) and the Office of the United Nations High Commissioner for Human Rights (OHCHR) have agreed to conduct a joint investigation into the human rights violations and abuses allegedly committed by all parties in the context of the Tigray conflict, as part of the much-needed accountability process for the victims.

• As Prime Minister Abiy said in his recent address to the parliament, regardless of the TPLF propaganda of exaggeration, any soldier responsible for raping our women & looting communities in the region will be held accountable as their mission is to protect.

Cessation of hostilities- For lasting peace in Tigray and to avoid the blood of citizens shedding in vain, treasonous TPLF top leaders are urged to respond to the Ethiopian government’s call for their peaceful surrender before all the necessary measures are taken to enforce the law. (N.B. the government’s one week ultimatum has ended yesterday)

Eritrean forces- With the departure of Eritrean forces from the Ethiopian border (as stated in Prime Minister Abiy Ahmed’s statement following his visit in Asmara), the Ethiopian National Defense Force will immediately take over guarding the border areas that were exposed following TPLF’s heinous attack.

Access and Humanitarian support- The government of Ethiopia has made leaps in creating unimpeded access for humanitarians in Tigray and in addressing the concerns of the international community. What remains now is to objectify this concern with a proper response to World Food Program (@WFP’s) call for US$170 million support to meet critical food and nutrition needs in the region. As stated in the prime Minister’s address to the parliament, 1.8mil people Tigray have been living on safety net for the last 20yrs while also under TPLFs leadership and COVID19, desert locust and other challenges plagued the region while TPLF drummed irresponsible war narratives. All these have exacerbated the problem in the region where the international community needs to scale up all the necessary support.

• The Ethiopian Embassy in Algeria held a Business to Business virtual session for Ethiopian Coffee exporting companies and Algerian coffee importers. Ethiopian exporters were able to present such details as quality, shipment and payment modalities to their Algerian counterparts.

• The Embassy of the Federal Democratic Republic of Ethiopia in Doha, Qatar has participated in the 8th Qatar International Agriculture Exhibition (AgriteQ2021). Companies that engage in agriculture, the environment, food and animal production industries, and Embassies took part the exhibition. More than 200 companies from 42 countries have participated through their embassies and trade bureaus in Qatar.

• Tourism Ethiopia in collaboration with the Ministry of Foreign Affairs gave an online training to our mission leaders under the theme, “land of origins”

• We have repatriated 906 citizens from Saudi Arabia, Jeddah and Riyadh

Ethiopian Americans and Eritrean Americans residing in the Washington and San Francisco have condemned the propaganda campaigns waged by remnants of the defunct TPLF clique and called upon their elected representatives to carefully analyze the situation in Ethiopia.