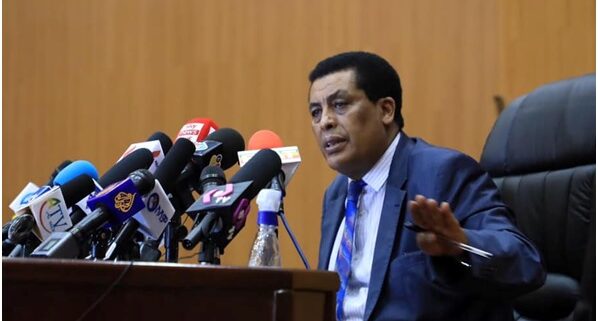 The spokesperson of Foreign Affairs of Ethiopia, H.E. Ambassador Dina Mufti, gave the Ministry’s biweekly press briefing today (02 June 2021) to the media. In his presentation, the Ambassador focused on political diplomacy, the situation in Tigray and the Ethiopia-U.S.A relations, Economic diplomacy and citizen-centered diplomatic activities. Here is summary of the Press Briefing,

Deputy Prime Minister and Foreign Minister of Ethiopia, H.E. Demeke Mekonnen, and H.E. Mr. Nasser Bourita, Foreign Minister of Morocco had held a virtual discussion on Tuesday (May 26) on ways to cement bilateral and multilateral ties between the two countries. Mr. Demeke also gave a briefing on current issues in Ethiopia, in particular the overall situation on the GERD construction and negotiation, the Ethiopia-Sudan border dispute, and the upcoming general elections.

The two sides agreed that Ethiopia and Morocco should expedite the implementation of the 12 agreements that were signed between them in various fields following the fruitful visit of His Majesty King Mohammed VI, King of Morocco in 2016.

Ethiopia and Sweden have held their bi-annual bilateral virtual consultations on Sunday (May 27) focusing on the relationship between the two countries, development cooperation, and the current situation in Ethiopia and the region.

State Minister for Political Affairs at the Ministry of Foreign Affairs of Ethiopia, H.E. Ambassador Redwan Hussien, and Deputy Minister for Foreign Affairs of Sweden, H.E. Robert Rydberg led the discussions. The consultations widely covered issues on the humanitarian support in Tigray, the negotiations over the Grand Ethiopian Renaissance Dam, and the upcoming general elections in Ethiopia. The meeting noted:

It is recalled that Sweden and Ethiopia signed a MoU in 2016 to hold bilateral consultations bi-annually.

Ethiopia, along with Côte d’Ivoire, is elected as the Member of the UNESCO Committee of the 1970 Convention during the Sixth Meeting of the State parties to the 1970 Convention which was virtually held on from 25 -26 May 2021. The permanent Delegation of Ethiopia wishes to congratulate the re-elected members and also the newly-elected members of the Convention 1970, on the Means of Prohibiting and Preventing the Illicit Import, Export and Transfer of Ownership of Cultural Property.

H.E. State Minister Ambassador Redwan Hussien held talks on Saturday (May 26) with the Deputy Prime Minister and Minister of Foreign Affairs of Qatar, H.E. Sheikh Mohammed bin Abdurahman Al-Thani on bilateral and regional issues. The delegation also met later with representatives of various Ethiopian Diaspora associations in Qatar to talk about the current situation in Ethiopia, in particular, the status of the Grand Ethiopian Renaissance Dam, relations between Ethiopia and Qatar, including regional issues.

State Minister H.E. Tsion Teklu participated in a forum organized by the African Union titled, “High Level Virtual Mission on African Migrants workers stranded in Lebanon”. A proposal containing an action plan over the matter was submitted to be deliberated in relevant meetings of the commission.

The ambassador-designate of the Federal Democratic Republic of Ethiopia to the Republic of Ghana, H.E. Hadera Abera Admassu has met and discussed with Resident Ambassadors South Africa, Sierra Leone and Kenya in Accra and AfCFTA Secretary-General. During his meetings with the distinguished Ambassadors, Ambassador Hadera explained the current situation in the country, the upcoming national election, the border issue with Sudan, the ongoing negotiation on Grand Ethiopian Renaissance Dam (GERD) as well as the need for cooperation and exchange of information on the African Continental Free Trade Area. He further underlined the need for the mobilization of support to Dr. Arkebe Okubay, the sole Candidate of the African Union for the position of UNIDO Director-General.

H.E. Ambassador Hirut Zemene delivered a public lecture on Ethiopia’s Foreign Policy at the CERIS-ULB Diplomatic School of Brussels on Monday (28 of May 2021). In her lecture, Ambassador Hirut extensively discussed Ethiopia’s long history of foreign relations and diplomacy practice, its long-standing values of giving prime attention to African causes as well as its faith in multilateralism and collective security. Furthermore, the Ambassador addressed the audience regarding the current situation in Ethiopia and the Government’s undertakings to solve the challenge that the country faces.

H.E. Amb. Nebil Mahdi, Ethiopia’s Ambassador in South Sudan on Thursday (May 27) met with Gen. Santino Deng Wol, Chief of the Defense Forces of the Republic of South Sudan, and conferred on issues of common interest to the two countries.

The ambassador updated the CDF on the current affairs of Ethiopia which include the law enforcement operation and the subsequent humanitarian supports, and the Ethiopian government’s engagements towards regaining normalcy in the Tigray region, the GERD negotiation process, the Ethio-Sudan border dispute, and on the upcoming Elections in Ethiopia. Gen. Santino Deng Wol, on his part, asserted that Ethiopia’s contributions to his country are unforgettable. He also affirmed that South Sudan will not by any means harbor any elements or cooperate with forces that work against Ethiopia’s interests.

H.E. Ambassador Nebiat Getachew met with H.E. Professor Abdelbeski Benziane, Minister of Higher Education and Scientific Research of Algeria on May 27,2021 and discussed ways and means of further enhancing cooperation in the field of higher education and scientific research between Ethiopian and Algerian higher learning Institutions. In their discussion, Ambassador Nebiat noted that cooperation among higher learning Institutions of Africa is an important aspect of exchange of development experience and vehicle to further cement pan Africanism among African countries.

II. Ethiopia-U.S.A relations and the situation in Tigray

The Ethiopia-Oman Trade and Investment Virtual Forum aimed at exploring and promoting trade and investment opportunities between Ethiopia and Oman was held on Friday (May 25, 2021). The event featured speakers from high-level officials from ministries and chambers as well as more than 70 participants from investors, exporters, and traders across the agriculture, mining, and energy sectors both from Ethiopia and Oman.

Mr. Dawano Kedir, Deputy Head of Mission of the Embassy of the Federal Democratic Republic of Ethiopia in Beijing gave a public lecture at Beijing Foreign Studies University (BFSU) on May 24, 2021. The lecture noted the longstanding relationships between the Ethiopia and China. Mr. Dawano also highlighted the modern China-Africa cooperation in the 1950s and 60s where China was strongly supporting the anti-colonialism movements in many parts of the African continent. The discussion also touched upon the advantages of the African Continental Free Trade Area Agreement (AfCFTA) in creating linkages between African countries.

State Minister for Economic Diplomacy and Diaspora Affairs H.E. Tsion Teklu held talks on Thursday (May 27) with Mr. Mohammed Abdiker, IOM Regional Director for East and Horn of Africa, on addressing the multifaceted problems related to the issue of irregular migration in the east and the horn of Africa. During their discussion, Ms. Tsion gave briefings on the efforts made by the government of Ethiopia and concerned bodies to repatriate Ethiopian migrants stranded in various Middle Eastern countries.

Ethiopians and of people of Ethiopian descent living in Norway (Oslo), Italy (Rome) and Canada (Calgary), have made rallies protesting foreign intervention in Ethiopia and the undue pressures that Egypt and Sudan are trying to exert on the government of Ethiopia.

1147 Ethiopians were repatriated over the week from Saudi Arabia and Kenya.